It’s a new month and time for a new contest!  This month, we’re inviting you to participate in a Toluna Food Fight.  Create a battle about your two favorite – or least favorite – foods and have the Toluna community battle it out to see which one takes the cake. 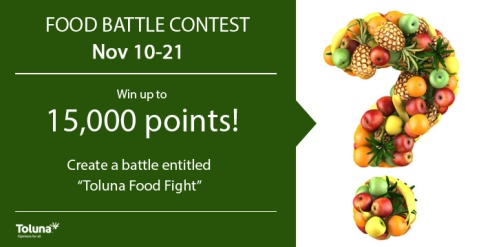 Time to get cooking!  Login to your account today and start your battle!

*Promotion Rules: Open to US and Canada only. Limit one battle created per person. The content’s title must begin with “Toluna Food Fight” to be officially entered, contain an image of each food, and must be created no later than November 21, 2014. 5 members with the most votes on their battle will be awarded 15,000; 10,000, 5,000 or 1,000 points respectively.  Bonus points will be awarded to winners by 5PM EST, on Monday, December 1, 2014, and will be uploaded directly to user’s accounts. Posts must not contain any language or image that is obscene, insulting, threatening, abusive, harassing, defamatory, libelous, untrue, misleading or invasive of someone else’s privacy. Toluna reserves the right to review all posts for content, and withhold bonus points from any user violating the rules mentioned above. Violation of these rules, and/or the Toluna Member Code of Conduct may result in the closure of your Toluna account.